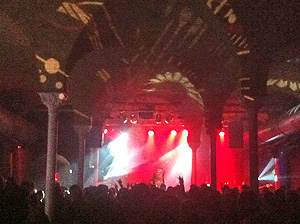 Gretchen’s program as a (live) club reflects the complexity of current musical trends.

Gretchen Berlin is electronic to unplugged, presents DJ sets and live concerts. Musical quality of genre and artist are decisive, not limited imagination, bigotry or boredom.

The place represents Berlin, gives a platform to national and international artists, their labels, but also newcomers. „Berlin’s premier club for leftfield beats.“ (earmilk) In the middle of Kreuzberg, in the former stables of the Prussian 1st Guard Dragoon Regiment Queen Victoria of Great Britain and Ireland from 1854, the nightclub presents itself in historical charm paired with cool club design.

The venue is named after a character from Goethe’s Faust and is located in a 19th century building that used to be an imperial horse stable.

The beautiful cross vault, the filigree columns are sounded by beats and basses, light installations surround and released to a musically interested audience. *** The word stands for purity, honesty and innocence. At the same time, it is the object of desire for Goethe’s Faust. But Getchen is also perhaps the most brutal serial killer in modern literature. STRAIGHT are in the end both… ***

The location is in Kreuzberg directly in the former factory area. Party here to the best beats to electro dubstep and new jazz. The venerable halls offer the perfect atmosphere for a club of this kind and the Gretchen is also quite typical for Berlin.

Here everything is still limited to the most essential and that is just the music. Also at the New Year’s Eve party, the Gretchen remains true to Drum’n’Bass, Trap, Funk, Soul are offered on a total of three floors.

Of course, the owners have modernized the factory premises a little. After a boisterous dance, guests can relax in the lounge furniture and have a tasty and cool drink.

Gretchen in Berlin is currently one of the most famous nightclubs in the city and the crowd is always very large, especially on Saturday. You want to visit an exuberantly good electro party? Then this dance club in Berlin Kreuzberg is highly recommended.

Due to the very good location, you can reach the event location easily and comfortably by public transport. Dancing and partying is of course until the sun rises. The dress code is loose in this club, you can come as you want.

The drinks are cool and cheap and the music loud and good – what more can be asked of a nightclub in Berlin? The Gretchen is always worth a visit.

Gretchen has been open since 2011 and has a solid track record of delighting music lovers with choice acts – both DJ and live – from across the musical spectrum.
Depending on the night, the line-up can lean towards electronica, drum’n’bass, funk, hip-hop, jazz or even acoustic sessions.

Traditionally, for example, on the first Saturday of every month, the Recycle party series gets together and celebrates the golden days of the Icon Club (1996 – 2012) at Gretchen.

The Recycle party series started back in the 90s, at that time still at Acud.
Later it moved to the Icon.
That brought it more attention and thus more people showing up to the events.
Of course, there were other good parties in town, but none of them were weekly, which basically meant that if you liked drum’n’bass, you knew where to go every Saturday without asking around or grabbing as many flyers as you could in the clubs.

Remember, we’re talking about the mid-90s, when you couldn’t just go on Facebook real quick and check out what was going on the next weekend.
Recycle – Berlin’s finest Drum’n’Bass became a name that was known all over Germany and people even traveled from other cities to party at Icon Club. These were good times, Jungle and Drum’n’Bass were a young genre and it seemed like there were no restrictions or limitations.
While other crews and promoters tried to establish regular drum’n’bass nights in Berlin but failed or gave up after a short time, the Recycle party series continued with finest drum’n’bass nights in Berlin and even managed to survive the times when many critics declared the genre dead.
Probably just the atmosphere at the events was a big point for the success of the party series.
There was that feeling of coming to a party at good friends‘ houses, where you might not know everyone, but can still chat and party together.
As with all successful party series, however, the particular location where the party series is held must also be considered as a factor in its success.
The bartenders didn’t use a measuring cup, which was certainly to people’s advantage, and the prices were fairer than in most other Berlin clubs.

The Icon was located in an old red brick building in Prenzlauer Berg, which was a brewery in the early 1900s that had a huge catacomb-like basement. It was there that the Icon Club was born.

What made the Icon so special?
Obviously, the creators of the Icon somehow managed to create a special venue.
It was probably a mix of the right bookings and the right staff that made people feel like they were partying with friends, whether you lived just around the corner or were a tourist.
Ikons regulars highlighted the family atmosphere between staff and crowd, the friendly door, and the peaceful vibe at parties, regardless of how crowded the venue was.

Icon fell victim to gentrification in Prenzlauer Berg in 2012.
Sad times not only for Berlin’s drum’n’bass scene, but also for the local club scene itself, as gentrification began to have a major impact on the capital’s nightlife.
There were fewer and fewer clubs and parties, especially in Mitte and Prenzlauer Berg, the strongholds of the 90s.

Fortunately, the makers of Icon were smart enough to start looking for a new venue back in early 2011 and found the space in Kreuzberg where they opened Gretchen.

Behind the inconspicuous exterior is a cavernous room with a high cross vault and slender columns from the time when the stables of a 19th-century Prussian cavalry regiment were located here. The
name Gretchen, by the way, was inspired by a character in Goethe’s famous play „Faust“.

Although the club opened only in the recent past, many people have fallen in love with it.

The operators are committed to alternative music genres.

Recycle moved into the Gretchen.
A lot has changed with the new club.
The frequency and lineup of parties in the series changed.
If the parties at the Icon Club usually had one or two special guests performing and partying at each event, and the parties were held on a weekly basis, at Gretchen the new idea was implemented: there were fewer, but bigger events.
From now on, the best drum’n’bass nights in Berlin took place once or twice a month. The number of guests increased up to four guests.

In addition, the so-called Classix nights were also held, but this already began in the Icon.

The concept of these nights is to celebrate together with other crews. Friends and locals from other crews are invited to play their personal classics, hits and evergreens of the genre since its inception. In this sense, it’s a little history lesson for the younger crowd and a place of remembrance for the older ones.

After many more successful years at Gretchen, this party series is legendary. Recycle has maintained its place and proved that it is the top class of drum’n’bass and is not called Berlin’s finest drum’n’bass for nothing.

Each event is another gathering of people with the same interests who want to have fun, party and listen to good music.

It’s a little off the beaten path of Kreuzberg and Friedrichshain, tucked away in a corner of Kreuzberg, away from the other nightclubs. Welcome to Kreuzberg 61, near Mehringdamm and Bergmannstrasse.

The Gretchen, an unobtrusive dance club with a great sound, an eclectic cross-cultural lineup and a mixed crowd in the middle of a historic setting.
This will give you a series of outstanding experiences and you will fall in love with what you experience there.

Gretchen has been open since 2011 and has a solid track record of delighting music lovers with select acts – both DJ and live – from across the musical spectrum.

The performances and parties in this Kreuzberg club are mainly electro, house, dubstep, hip-hop and experimental.
The club does not follow the house and techno trends of the city, but also mainly focuses on alternative genres like dubstep, drum and bass, jungle, garage and electro.
The result is a refreshingly different atmosphere and crowd. Clubgoers dance on platforms and really let loose.
Gretchen is one of the impressive venues to be seen in the Kreuzberg district.
The club has a large stage, so it is also perfect as a place for many concerts.

Gretchen is dimly lit, with the red neon lights that illuminate the ceiling and the club’s signature interior arches turned off, while the staff is friendly and the drinks are reasonably priced.

Next to the large dance floor, there are always plenty of places to sit and chill.
Or to have
a drink at the bar and sit back to enjoy the unique atmosphere that Club offers.
The door is known for having no policy other than not being too drunk, on drugs or underage. This mixture makes it a place for everyone, from young to old, from rich to poor or other social boundaries.
Here there have been wonderful moments, incredible live acts, impressive DJ sets and outstanding performances especially in the drum and bass area.
The philosophy of the operators has always been to promote new artists and exceptional music, which means a lot of love for music, digging, researching and focusing on the latest trends – or better: being a tastemaker.
All the work they put in is definitely paying off. You just have to see people leaving Gretchen exhausted but with big smiles on their faces after a DJ set, concert, party, club night or any other event.